This Friday Scholarship Guide is about the resources a team has to work with - the "level of funding" available to a coaching team.

Whenever we talk college sports and the recruiting world, you can't put aside the fact that financials matter. How much budget does the athletics department make available to the coaching staff?

Let's deep dive into all of these 3 options and take a few different sports as a starting point.
Before reading on however, make sure to understand what the "the maximum amount of scholarships" stands for and review tennis or soccer for example: College Tennis & College Soccer 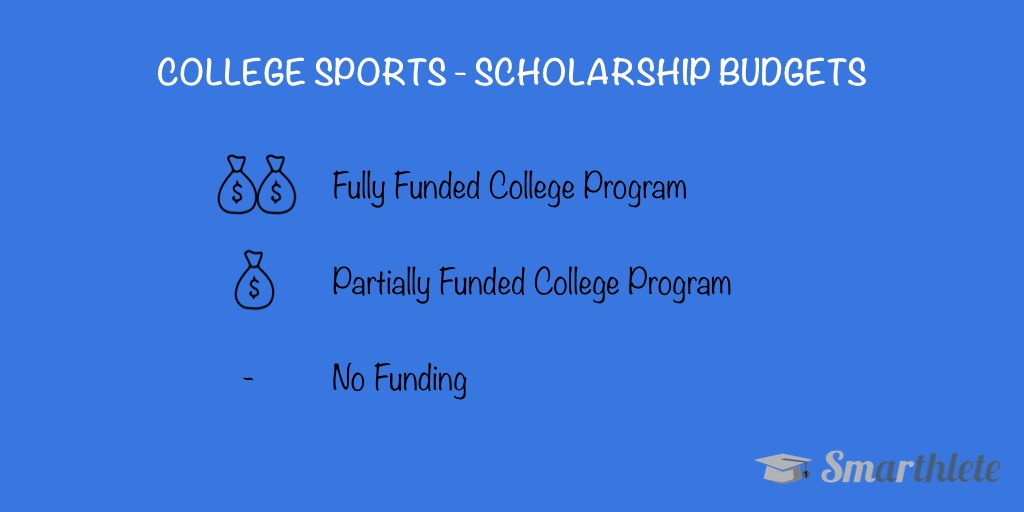 That's the dream scenario for coaches, as it puts them in the driver's seat of their future. A fully funded team means great prerequisites to attract strong talent. At the end of the day you can only build as strong a team, as you are able to recruit with your budget. Even coaches, who are well-known for helping athletes get the most out of themselves over time, can only help athletes develop so much. In other words, you can't overcome the gap between a great recruit and an average recruit during the college career.

Whether a team is fully funded or not is not necessarily something that you need to know prior to getting in contact with the coach of the respective program. In fact, you shouldn't think about your potential scholarship at this point. Get on the radar of the coaches first, make them understand that you are interested, feel their level of interest and then one thing will lead to the other. More about why you should definitely not ask a coach about your scholarship at the beginning of the conversation in another edition of the Friday Scholarship Guide in a few weeks' time.
Having said that however, you can tell quite a bit from the way teams are doing. Teams that are less successful over time probably have (financial) limitations as regards the players they are able to attract.

So, which teams are typically fully funded?
Look at it in this way: running a large volleyball or basketball team costs loads of money: think scholarships, traveling, uniforms, gear, food, and other costs. It does add up and needs to be financed in one way or the other. That's why teams at larger schools or teams at schools, which generate a lot of revenue (in one way or the other) generally are better funded than other, smaller schools. It could also be that athletics programs are fully funded as a result of the team's success over time, relying on a program's ability to attract additional student (athlete) enrolment in the future.

A logical consequence of athletic departments' varying degree of budget, they can choose to only make available a portion of the permissible scholarship budget for a team. Again, you might never find out why, but it can be the reason why a coach is simply not able to offer you a large(r) scholarship, even though she wants to recruit you very badly. A school might be able to offset this disadvantage by giving out more generous academic scholarship awards, but again, you have to find out about that once you enter into a dialogue with the coach.

Note that these completely different financial starting points may sort of decide whether you could even attend your dream school or not. Say you'd have what it takes both academically and athletically, but the school is only partially funded: if you don't have a budget to bring to the table, which could cover the remaining costs of attendance, that's basically it.

Last but not least, some schools choose not to provide any kind of athletic scholarship budget whatsoever. A great example is the Ivy League, with Harvard, Princeton and the likes "compete" without handing out any sports scholarships. They have no problem attracting outstanding student athletes despite that lack of incentive, but guess what: the prospect of graduating from Cornell wins over a partial scholarship from another D1 school. That's no problem for such acclaimed institutions, but considerably more difficult for teams at schools, which do not attract such a global pool of strong students.

There are a few things that are important to keep in mind and be aware of:

If you've read that far, chances are you really do want to find out more about the way things work when it comes to talking to the right programs and college coaches. If you scroll back up, you can sign up for our blog newsletter with your email address. That way you will receive our brand new future articles straight in your inbox.
We hope you'll check back in on our Friday Scholarship Guide soon again. And if you happen to be ready to start connecting with coaches, see what we have in store for you on Smarthlete or email us (contact@smarthlete.com) and let's discuss how we can help you find a college team! Stay tuned ...