Are you an ice hockey player, working hard day-in and day-out in order to make your high school  team? Or just about to start your junior hockey career? Or say, you are fully aware of the fact that you are not among the very best players anywhere close, but just really love the game and want to get as much out of it as possible in the years to come?

No matter your background, you may find yourself in the position to think about college hockey.

Hockey's a bit different from a lot of the other college sports, which is one of two reasons why today's Friday Scholarship Guide will be all about hockey and hockey only.

The other reason is our recent addition to the Smarthlete family: a true expert in the field, who will be leading our hockey division.

Starting out with why hockey's a bit different from other intercollegiate sports, ice hockey is a comparably “small sport”, measured by the number of schools sponsoring ice hockey on the men's or women's side.

Compare that to team sports such as football, volleyball or soccer and it becomes obvious that college hockey offers fewer playing opportunities than other team sports.

Unlike other sports, not all college divisions sponsor ice hockey, which is why hockey is limited to 3 NCAA-sanctioned divisions:

In addition to the above conferences, some NCAA teams compete as Independents and other big schools choose to have their hockey programs compete at the club-level in the ACHA.

Have a look at this interesting recent interview with the GM of Loyola Marymount University (D1 school with its ice hockey program competing in the ACHA D-II).

If you are interested in comparing the various numbers, divisions and conferences in more detail, review our designated sports page: College Ice Hockey

It's important to understand that ice hockey is an equivalency sport: a coach may distribute the available scholarship budget, as fit. In other words, a coach could offer 10,000 USD to a development player, 60,000 USD (close to full cost of attendance) to a real stand-out player or - although very unlikely - offer the exact same amount of scholarship money to all players on the roster.

While many prospects disregard D3 hockey right away because of the lack in scholarship money, many of those schools might put together very attractive scholarship packages, which are not based on athletic but on academic merits. Many times, such D3-offers could turn out not only on par with D1 or D2 offers (based on athletics), but even more financially attractive.

The same goes for club-level hockey, which a lot of schools choose to have their teams compete in, usually in the ACHA (American Collegiate Hockey Association).

* … Due to the fact that the number of sports programs is dynamic and constantly changing: Programs may be discontinued by universities and new ones added, which is reflected in our university database to the extent possible. Example: Alvernia College has announced it will be adding NCAA D-III program to its portfolio of sports starting in 2022-23, which is why the team is already listed in our data based as running a NCAA D-III ice hockey program.

The hockey recruiting process is of a different character with eligibility rules allowing hockey players to be way older when starting their college career compared to other sports. In reality the majority of athletes competes for a junior hockey program for a year or two before getting recruited. While it does happen that somebody goes on to play collegiate hockey right after high school, it's a pretty rare thing to do. Team and league of the junior hockey program will greatly determine the viable college future of a prospective student athlete, as there is a major difference in the level of competition. To name a few, you've got the following in the U.S.:

Note that players competing in the CHL are not eligible to compete in the NCAA anymore, which requires careful consideration by anyone wanting to keep afloat different options. Going for CHL competition means turning pro sooner than later. 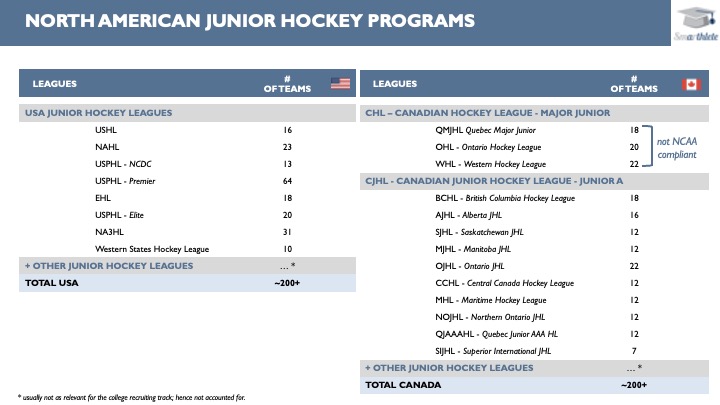 A lot of times you have athletes move across the country or continent in order to play for the “right junior hockey program”. Whether moving away from home, living with a billet family rather than playing for the local program close-by is the smartest thing to do is often a tough decision to make with severe implications in terms of athletic development and financial commitment. While elite players don't pay to compete for the best junior hockey teams, lower tier programs are “pay for play” programs

Your grades in high school and SAT/ACT scores still matter a great deal when knocking on college programs' doors. Thanks to COVID you may not need academic test scores (SAT/ACT) for college application and NCAA purposes as a must-have with schools going test-optional, but many colleges still base some of their academic scholarships on test scores.

Getting recruited by a D1, D2, D3 or ACHA team is the ultimate outcome of a lot of things done right. Stats, playing time, right choice of junior track, presenting yourself to college coaches, but also doing all that at the right time early enough. Some of the above may come naturally to you and or simply happen, but you've got to make sure you have a game plan in order to end up with your name in that college roster of your dreams.

Often times it involves understanding one's level of play and facing the truth:

Am I D1 material or am I chasing an unrealistic dream that could lead to me losing out on lower-tier (but better) opportunities?

Quite obviously the coaching staff or parents are not always the best ones to tell and have that conversation with you. Somebody who has been in the hockey business long enough is on the other hand. Somebody who has played collegiate hockey, been on the sideline coaching college teams, junior hockey programs and pro teams.

A hockey expert can help you identify and find out what your junior hockey and college route may look like going forward. Telling you candidly whether tackling the process on your own is a realistic option or rather not. Presenting you with your options of fulfilling yourself the dream of playing intercollegiate ice hockey.

Our hockey expert is Mark Bourgeois, Canadian/American, residing in Kansas and the latest addition to our global team. With a wealth of experience as a player, coach and manager in the U.S., Canada and overseas, he's our go-2-person all things junior and college hockey, helping players find a program that is the right fit for their future development.

Ready to speak to somebody who not only understands the abbreviations, but actually knows what playing BCHL, ECAC, or NCDC entails? Complete our evaluation form or sign up for free with a recruiting profile and our hockey expert will reach out to you. You can also shoot us an email at contact@smarthlete.com and we'll be happy to answer any of your questions!