How many professionals from college tennis play in the French Open 2015?

The first week of the French Open in Roland Garros is coming to an end and all eyes are on the main draws of men's and women's competitions. So are ours, but for us the tournament started a couple days earlier as we're particularly interested in the crowd of players between #100 and #200 in the rankings.
The men's and women's qualifying draws determined the winners who advanced to the main draws. Among the contestants college tennis experts were able to spot some players with a past in college tennis.

Just like The Tennis Notebook did in its wonderful main draw preview, we'll take a look at the draws from the perspective of college tennis, providing information about the players' age, ranking at the time of writing, as well as the college teams they played for and respective conferences:

Compared to the first major of the year, the Australian Open '15, fewer college players tried their luck at the French Open. For various reasons, but let's take a look at the participants: 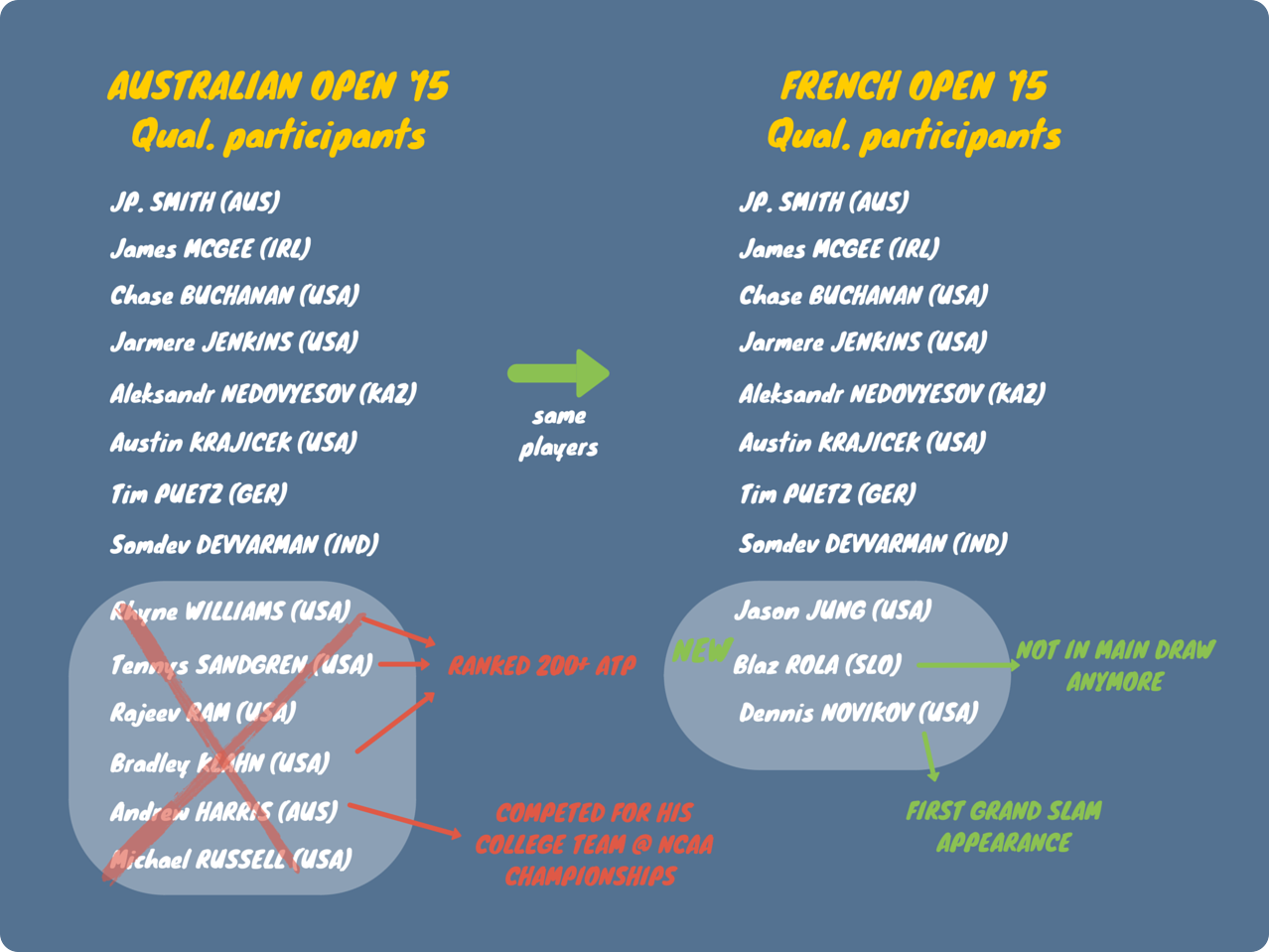 Unfortunately, none of the guys was able to showcase their best game in Paris, and not a single one made it to the main draw. German Tim Puetz, former collegiate player at Auburn University was the only one who made it to the third round, eventually losing against fellow countryman Matthias Bachinger.

Back in Melbourne two former college players (Puetz and Russell) qualified for the main draw, making the first major of the year a more successful one than the second major for college tennis. Why, you might wonder? Well, one reason is most certainly the fact that college players develop their game on hardcourt, spending very little to no time on clay courts throughout the years. Though they probably don't spend significantly more time on grass courts, we can expect them to step it up in Wimbledon again in some weeks' time. Though grass courts are not what they used to be back in the days, you can still consider them faster surfaces, which should naturally suit the college armada better...

Let's take a look at the qualifying draws and find out which college the guys played for:

Looking at if from the perspective of the various NCAA D-I conferences, we find the picture it draws quite interesting:
SEC, Big 10, and ACC each are represented by 3 players at the French Open. Adding the 4 main draw contestants (see below) to the qualifiers, SEC and Big 10 lead the ranking with total 4 players each in the event. That's quite an interesting one given the NCAA Team Championships, which just finished off the 2014/2015 season, saw semifinals with 3 out of 4 teams from the Big 12 conference, which dominated this season including the #1 and #2 of the ITA team rankings (05/01)! 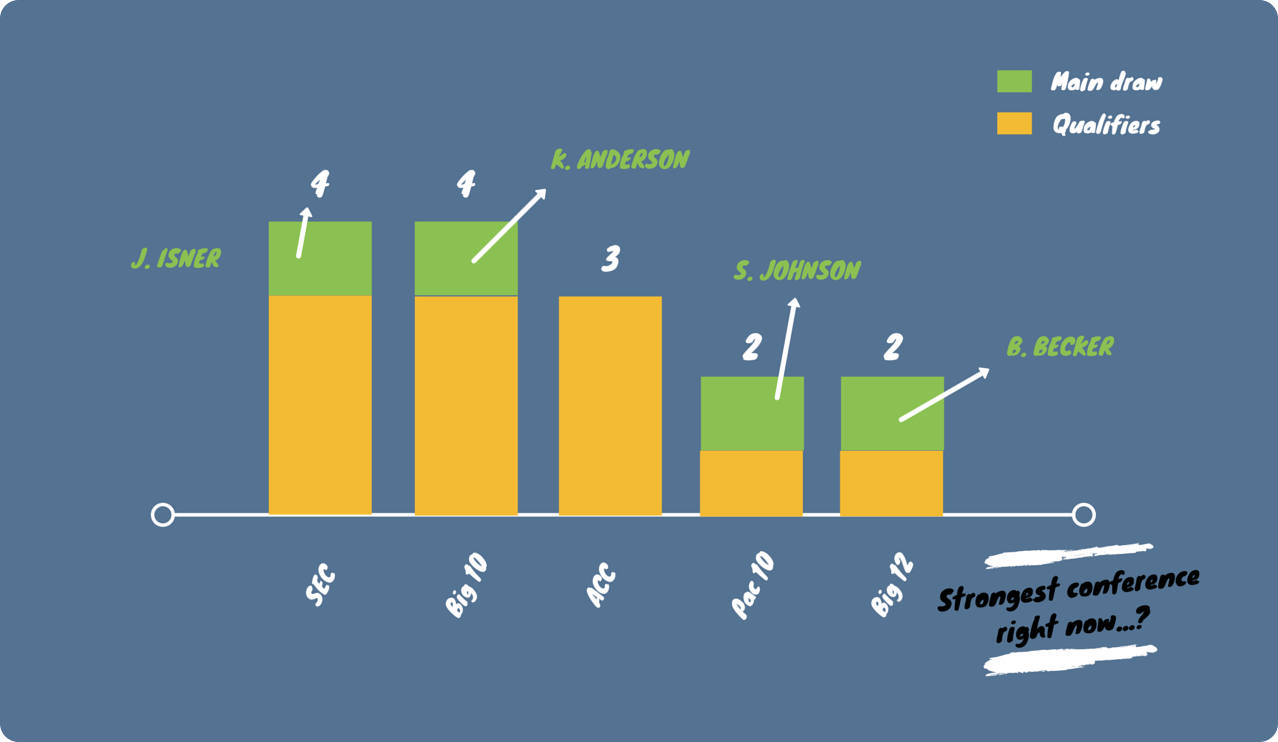 Women's tennis is far from displaying the same depth of former college players in the top rankings as the guys. Two women in the qualifying make this a pretty easy conclusion. Reasons are:

Maria Sanchez (USC) and Julie Coin (Clemson) tried their luck, but lost in straight sets in the second round.

In the main draw of this year's French Open, we have the usual college suspects: John Isner, Benjamin Becker, Kevin Anderson, and Steve Johnson. The Baylor graduate Becker is currently ranked in the Top 50 of the ATP rankings and reached his highest ranking ever last October with #35 at age 33! After an epic five set win against Verdasco in the second round, he was unable to play his third round match against Nishikori. As he lost in the first round of the French Open last year against Brazilian Thomaz Bellucci, he walks away with some more points for the rankings.


While Isner lost in the second round against Frenchman Chardy, Johnson and Anderson made it to the third round and are still in the race to make it to the second week of the event.

4 college players in the main draw of Roland Garros; 3 short compared to the Australian Open, in which Blaz Rola was ranked high enough for a ticket into the main draw, and Michael Russell and Tim Puetz won the qualifying.

On the women's side, college tennis is represented by the same contestants as in Down Under: Nicole Gibbs (Stanford) and Irina Falconi (Georgia Tech).

As was the case in the Australian Open, this year's Roland Garros men's doubles event looks almost like a NCAA college tournament. College tennis is represented by a total of 25 former college players, 3 more than in the Australian Open. Among the top favorites for the title are obviously the #1-seeded Bryan Brothers (Standford), but another really exciting pairing was the following:

How do you think the players will do at the next highlight of the season: the grass courts in Wimbledon? Let us know what you think on Facebook or Twitter and come back in some weeks' time when we turn the spotlight on the up-and-coming crowd of college tennis players again.