"I want to go to a big school, and I want to be a starter in a strong team."

Above is a typical statement by young tennis players who are looking to get a scholarship. Boys and girls alike, most of them emphasize that it's NCAA D-I tennis they have in mind. It is right there we then mention that college tennis is more than just one division. While some kids have heard of NCAA D-II, D-III, NAIA, and NJCAA, they are often surprised when it comes to availability of scholarship money in NCAA D-II and NAIA. "But what is the difference really between these two divisions when it comes to level of play?" is a common question we get.

That made us want to look a little closer into the actual difference. But how to best go about it? Do you compare the junior, college, or international rankings and tournament results of a selection of players? Or some of the dual matches, which have been played between NCAA and NAIA teams? All that does sound like a lot of work... Good thing the Universal Tennis Rating makes this comparison a lot easier and reliable. If you're not yet familiar with the UTR, here's a description of what it is the organization is offering to the tennis world:

UTRs range from 1.00 (beginners) to 16.50 (top professionals) and are calculated based on each player's last 30 match results for matches played within the last 12 months.

Universal Tennis provides a "Power 6 Rating", which calculates the combined ratings of the 6 highest-rated players on the team. It's fair to assume those players represent the starting line-up. In a second step we then applied the top 20 teams' Power 6 rating instead of going through the UTRs of all players individually.

We had a pretty good idea of the level of play before, but it feels tons better to be able to get it backed up with solid and reliable data - see for yourself below: 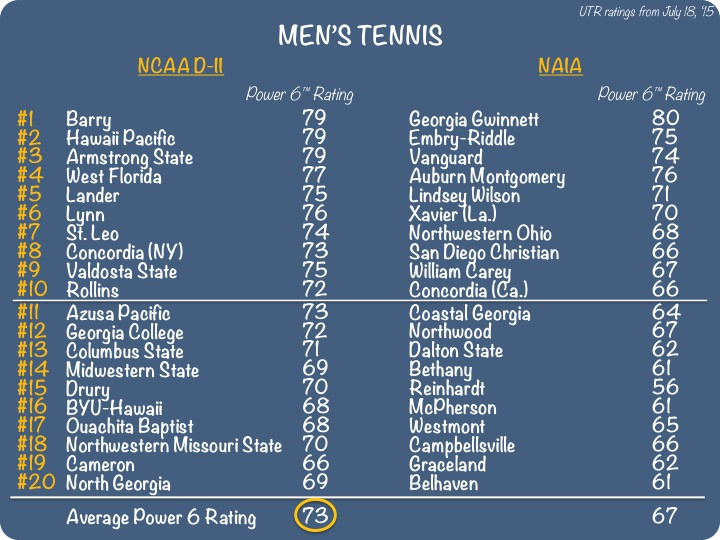 A look at Gwinnett's (NAIA) 2014-15 schedule shows that they only fell short against Barry and Hawaii Pacific, while celebrating victories against all other NCAA D-II teams played. As many of you might be even more familiar with NCAA D-I levels, a comparison is in place to put it in the right context: 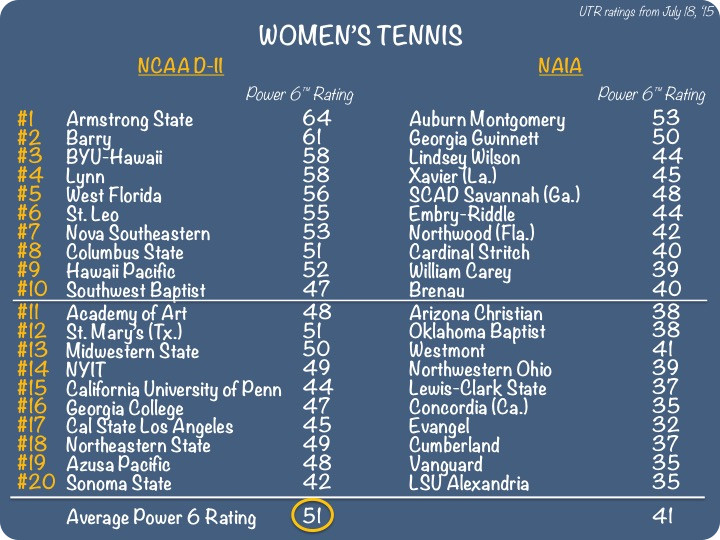 The two divisions' top teams met last February, and Armstrong walked off the court with a convincing 9-0 victory, supporting the picture the data draws. Again, we'll also compare the teams to D-I tennis:

So what does this all tell us? It tells us that NCAA D-II men's and women's tennis is stronger than NAIA tennis. How much stronger? Well, that depends, but while the top ranked teams on the men's side are relatively close to each other, there is quite a gap on the women's side, which continues all the way down to lower ranked teams.

Prospective student-athletes should be aware of the various college choices. Part of this is knowing about the different divisions. Not every player is D-I material, and that's totally fine. There's so much great tennis taking place in "Small College" Tennis. Get a UTR, compare yourself to the level of play of different teams, sign up for free on Smarthlete - the tennis recruiting platform, and contact the right coaches looking for players with your rating.

Let's find out together whether you're future is in D-I, D-II, NAIA or any of the other college tennis divisions!