5 Things You Need to Know Before Signing

It's the time of the year when thousands of athletes of various sports sign their National Letter of Intent, or "NLI" in short. So do many teenage tennis players, eager to nail down their scholarship agreement and their spot in their future college team. So this is a time when a long and tedious recruiting process comes to a halt for many athletes. Hours of looking at schools, time spent writing e-mails and talking to coaches, and some more serious discussions with family and friends. For many players and future college students this has been a walk in the park, whereas others spent more time making up their minds. But whatever the story behind, once they sign an NLI, they are as good as through.

November 9 - the start of this year's early signing period, which goes on for a full week and ends on November 16. This blog today will therefore highlight some of the key features of the NLI. In detail, how the process works and 5 things you need to know about signing. Let's get started!

The underlying procedure of sending and signing the NLI is actually a pretty straightforward 2-step format:

The graphic below outlines these two steps and highlights some of the things to keep in mind, which we cover below.

There are obviously exact guidelines, which regulate the issuing of NLIs and the proper completion. As this blog edition is aimed at helping athletes (and their parents), we want to keep it simple and to the point. 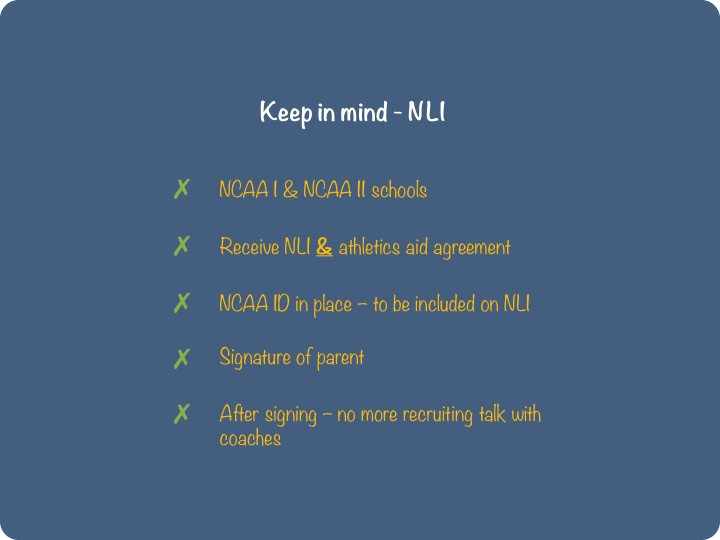 For a more detailed explanation coming straight from the organization behind the NLI, we highly recommend you take a look at the NLI's video:

NLI in a nutshell

With all of that being said, what is the NLI all about?

It's a win-win for both sides. Signing an NLI in the early signing period, the athlete has secured a spot and financial support for his/her studies at a tennis program already now and can focus on finishing his/her studies as well as developing his/her game for the remainder of the time. For the coaches on the other hand, they are able to sign an attractive recruit well in advance - almost a year ahead - of the next full academic year.

We are naturally super excited, if we see posts like this pop up in our twitter timeline these days:

Do you want to bring yourself in position for a potential athletic scholarship and the next regular signing period starting in April 2017 or in the years to follow? Create a free recruiting profile on Smarthlete and reach out to as many coaches as you like in the easiest way possible! Not a student anymore, but interested in collegesports and in particular collegetennis? Follow us on our social media accounts, Facebook and Twitter, and don't miss out!