Exactly a week ago, Colette Lewis from ZooTennis presented her opinion on the way line-ups in college tennis are being set in a guest post here.

Her proposal has got us discussing at Smarthlete, and we'd like to respond and contribute to her suggestions in today's edition of our Friday Scholarship Guide. To get started, here's a brief outline of Colette's thoughts:

Her point of departure is that the current mode of determining who plays who in dual matches is an unknown concept in other sports. College tennis sees the best player of Team A play against the best player of Team B, Team A's #2 player against the other team's #2, and so forth. In other sports however, the point is exactly that coaches manage matchups and tactics in order to have an edge over the competitors. Colette suggests that coaches set the lineup shortly before the match starts by alternately designating players. Coach A announces player #1 and coach B responds with his/her pick for the #1 position, then suggests his/her player for #2, which coach B responds to. The same concept is applied to all the remaining positions as well as for doubles play. For those of you interested in the details, we highly recommend you take a look at her full proposal.

The post also offers a number of advantages of her proposal, which we agree with. Examples are that the ITA would spend less time on handling match protests, and college rookies or injured players could be helped getting experience in various positions. But we also feel there could be a potential threat deriving from being paired against much worse or even "uncompetitive" players. In the extreme case you could have the clear #1 player compete against one of the other team's substitutes; depending on the difference in the level of play a potential mood killer for all parties involved: the #1 player, the opponent, and the audience. We see this being a threat due to two reasons:

We discussed how Threat #1 could be prevented as this would automatically fix Threat #2. We arrived at the following.

Make use of the Universal Tennis Rating

Bobby Knight from College Tennis Today uses the UTR on an everyday basis, covering matches on D-I level. Whenever there is a surprising win based on the UTR, he calls it a "Universal Tennis Rating Upset".

Example: Player A has a lower UTR of 12.87 and wins his/her first round match at a Fall Invitational against Player B with a better UTR of 14.02. The difference of the athletes is 1.15 on the UTR scale. Bobby calls such a result with a difference of more than 1.0 UTR points a "UTR Upset".

We discussed Colette's concept and added the limitation that coaches need to respond by designating a player, who has a UTR within a "Non-UTR Upset" range of +/- 1.0. Naturally, there are not a whole lot of UTR Upsets happening, which makes us conclude that 1.0 could be a fair limit to use. (Note: Or at least a starting point to discuss.)

This would help fix the above threats: Players who are inferior feel that they have a chance of winning; it's tennis after all and everything can happen, but that obviously depends heavily on the difference in the level of play. At the same time, the stronger player is challenged and feels a larger pressure to perform. By maintaining the designation of players within a "Non-UTR Upset" range, you will also ensure that fans see matches which are on equal terms.

You can obviously challenge whether a range of 1.0 makes sense and is feasible, especially so if ranked teams play against non-ranked teams, and probably even more so in small college divisions. But our concept should get one thinking to use the UTR rather than considering the suggested 1.0 as a range, set in stone. Might be there should be different UTR limitations in various college divisions and special exemptions in order to provide for the varying depth of players. It could also mean that this concept is not applicable at all to dual matches between teams from different divisions. But we feel there is something about the UTR that could add an interesting dimension to Colette's initial proposal.

We provide an example of a hypothetical dual match, using the UTR of this week (11/25/2015 - UTRs are dynamic and change with new results coming in every week). We pair two D-I men's programs from the same conference: University of Dayton vs. Saint Joseph's University. Apart from that the process provided by Colette is applied: 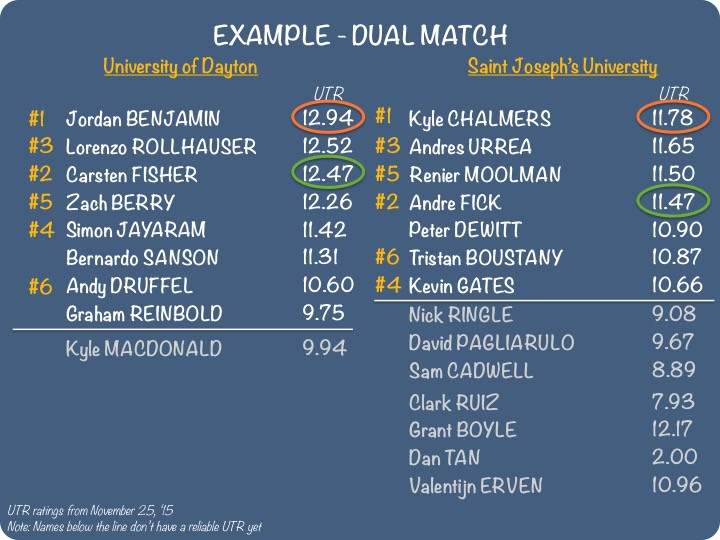 Looking at the strongest players, you can tell right away that there's a gap larger than 1.0 UTR points (1.16). In such a case we believe an exemption (while still using the UTR) could make sense, which forces the top players to play against each other. Apart from that, ZooTennis' lineup setting is followed, provided the pairings stay within the +/- 1.0 limitation. We end up having players face each other who might otherwise be ranked differently in the traditional lineup setting.

But there are of course other matching possibilities, and that's what we would find intriguing about this model. The coaches are able to respond to the designation of the player, taking into consideration potential previous head-to-heads between individuals, styles of play, and the probabilities of winning against higher ranked players. The traditional line-up setting would see Dayton as favorite with the first 6 players all better ranked by UTR. The alternative model would still predict Dayton to be stronger, but now only in 5 out of 6 matches. As there are no UTRs for doubles pairs, you could consider a similar approach for doubles by using the average of the combined UTRs.

But why is it we believe the UTR could be a legitimate assessment tool and addition to Colette's initial proposal? Its recognition is on the rise. Here's an example: This year's National Indoor Intercollegiate Championships (NIIC) reserved the first of six at-large selections for the men's main draw for the player with the highest UTR. This shows that the UTR is in fact a reliable rating in college tennis.

What do you think about the original proposal and how do you look at our adding of the UTR in this context? Do you agree or disagree? We look forward to hear your thoughts on this!