3 Reasons Starting Early is Key in Getting Recruited

There was this friend of yours who verbally committed to a soccer program in October of his senior year (in high school)?
But then, you also had this other friend who committed in writing four (4) weeks (!) before she was going to start her college tennis career.
Wow, that is a difference of nine months and does make quite a difference in terms of when to get started.

What's the right timeline then? When should you start with the recruiting process and why was it again you should get started early? 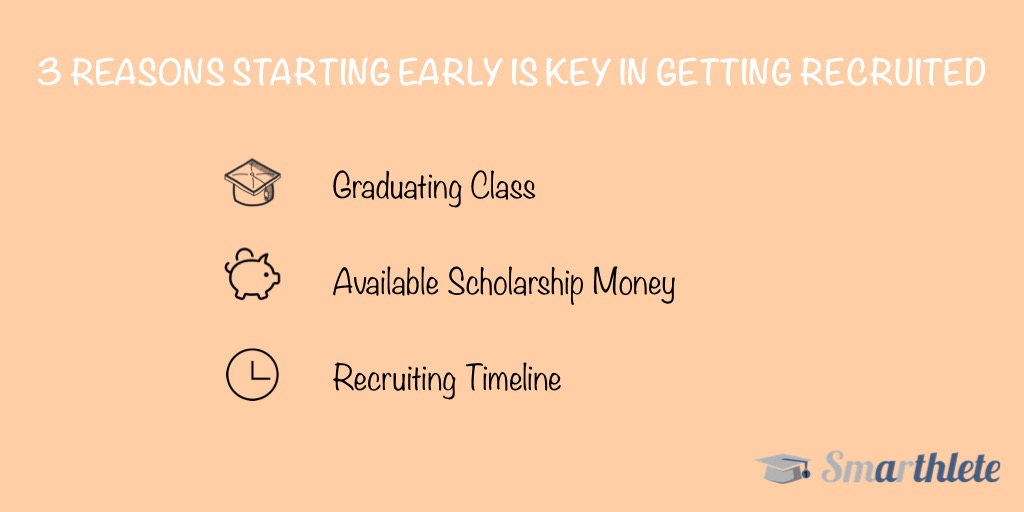 The Ideal Recruiting Timeline to Boost Your Scholarship Chances

These three reasons tie in well together:
In case you have a school that you would love to get recruited by, you do want to get on the radar of the coaching staff as early as possible in order to let them know who you are. Say, you are able to make contact two years prior to your intended starting date - if the coaches really want you, they can plan their budget accordingly and set money aside, before making any (short-term) commitments to a player on the same position. That way you are more likely to avoid a situation in which the coach has no scholarship money available whatsoever. It also helps you get some clarity early on - if your dream school is not interested, be it because of the lack of scholarship budget or simply from an athletic standpoint, you have plenty of time left to be looking for other programs that attract you equally well.

As many things can happen (such as students transferring), almost any coach would still be looking to recruit athletes around two years before your intended starting semester. Can you see that it makes sense to be in the race for an offer when more coaches are looking, compared to a situation when only a few teams are left?

We're going to be honest: Not caring about any of the above and getting started way too late can work out just fine; the way it did for your friend who got recruited 4 weeks before moving into her dorm room. BUT, the quality of your decision is not going to be as great, as it had been with a start much, much earlier. It's about getting a good feel for the coach, building a relationship over time, giving the coach a chance to get to know you much better and you doing a background check on the school. After all you will be working with the coach a lot and spending quite some time on the campus in a new corner of the country (or even world).

So, are you in it for an early start or do you still prefer letting things slip out of your control and get started way too late, because you didn't take the recruiting process serious enough?
In case you still need some more convincing, email contact@smarthlete.com and get in touch with us. We love to talk about college sports and the recruiting process :)

Note that this is only one of 5 big mistakes that are typically done by student athletes prior to getting recruited. Check out this article for the other four: 5 Biggest Mistakes in the College Recruiting Process
If you're ready to get started, check out what we have in store for you here on Smarthlete. You can let us help you through the entire recruiting process, during which we assist with everything from producing the highlights reel to getting your college applications sent in on time. Or you sign up with a free recruiting profile and get in contact with college coaches already today.
Dominic Tinodi August 16, 2018
Share: