In many cases, putting together a college soccer recruiting video is going to be one of the most important things for you to do during your recruiting process. Before we dive into how you to best go about this task in today's edition of the Friday Scholarship Guide, let's make sure you understand if you are one of the athletes who should definitely prepare a video or not.


Both of these alternative routes may make putting together a movie of yourself somewhat less important or perhaps even unnecessary. But if you're neither being scouted actively nor planning on attending showcases/clinics, there is no reason not to get to work.

Here is a common scenario:


A solid soccer player decides in the summer between junior and senior year that he would like to go to college a year from now - in the fall following his senior year. "Awesome, let's put together your highlights reel: how many matches of you have been filmed over the last couple of months or so? Zero? Oh boy ..."
In order to avoid such a situation, timely preparation is absolute key! More on "timely" in 3 Reasons Starting Early is Key in Getting Recruited

1. Get Clips of Games

Now, there are essentially 3 sources of game footage and or ways how you can go about collecting:

Collecting footage is just the first step of getting prepared:

2. Quality of the Clips

Reviewing the quality of the footage is the next step. Here's why:

If you review available video material along these criteria, you may have to decide that some of it does not qualify for your final selection of scenes for the recruiting video. And here's another very important thing: check so you're allowed to use the video material, which is obviously no problem if somebody close to you films you. 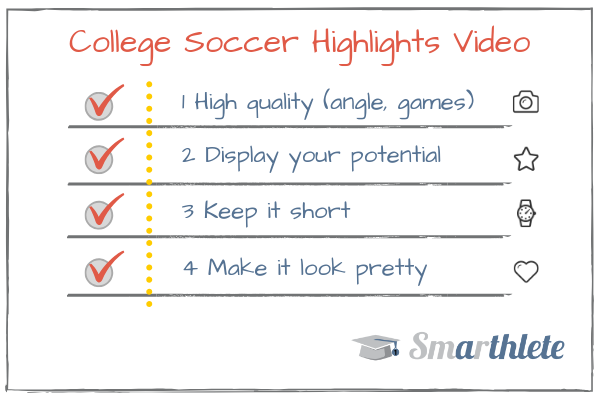 After you've made sure the quality of the footage is good enough, you can move on to the next step: choosing relevant game scenes. Depending on where you get the videos from, there are essentially two ways how to go about that:

You're not going to play on the same level every single game of the year, which is why some games could contain a load of great game moments, whereas others have zero to none. Typically 2-5 games are a good number to base a well-done recruiting video on, as this allows showing your versatility against different opponents.
What do you do in case you simply don't have enough match footage available?

Coaches will always prefer game over practice footage, but if you feel that the selection of clips is a little too weak or doesn't fully reflect your potential, get on the field and get some more filming done. For goalkeepers, definitely get practice on top of match clips.

When it comes to the final editing of the video, you can get a lot of things done right, but you can also get a lot of things wrong, which will have an impact on coaches' experience, once they review your skills. Here're a few things to keep in mind during the process:

Lastly, it's OK to get help. Whether that's mum and dad or a friend of yours helping with the video, there are also companies like us who offer to assist with the process of making a strong college highlights video. Here on Smarthlete you can do two things:
Dominic Tinodi June 06, 2019
Share: